Max is smelly. Granted, I have a lot to do with that since he cannot exactly bathe himself, but he is even stinky mere days after he has a bath.

I don’t know what he does to get stinky so fast, because he spends so much of the day inside. And when he is inside, he mostly just sleeps. When we go outside, he is usually on leash, so I know he is not rolling around in smelly waste or anything like that.

But Max is a dog, and I suppose his stinkyness just happens. Though he may prefer different odors than I do, he is not allowed to get in situations where he could choose to be extra stinky. His stinkyness is just a natural part of his being a dog.

He is very lucky that he looks so cute and that people are more distracted by how he looks than how he smells. It is actually somewhat surprising to me that more often people don’t back away after coming up to pet him because of his stench. But…he is really cute.

Nevertheless, Max’s stinkyness got me thinking about how I too often judge someone before getting to know him or her. If I get any sense of “stinkyness” after meeting someone, I too often retreat from the encounter. I am quick to judge with eyes and nose, rather than brain and heart.

But Max has taught me that stinkyness does not define a person, and often a person’s stinkyness is not his or her own fault. Sometimes stinkyness just happens. And stinky people are people too. 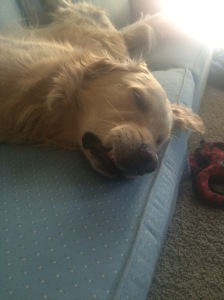 In fact, I have often been a stinky person too. Both literally, when I just haven’t put much time or thought into my hygiene, but also when I have a tough, stressful week and my attitude is not as pleasant as I might otherwise wish it to be.

In those moments of my own stinkyness, Max has taught me how to be more accepting, because he is eager and happy to be around me no matter how I look or what my mood is. I can only hope that other people offer that kind of grace to me when I am stressed and grumpy and stinky. And I hope that I too can offer that kind of grace to others whom I encounter in their own stinky situations.

Max has taught me that despite the clichés, I really should look deeper into a person’s being before judging whether or not to spend time with him or her. I should be more understanding that sometimes stinkyness just happens. And I should be more eager to be around all people, even those who are not the most well put together or those who are having rough days.

So, thank you Max for accepting me when I am stinky. And thank you for teaching not to be so quick to judge someone else based on perceived stinkyness, but rather to be open to the value and worth of all people.